Apart vs A Part: Which One Should You Use? 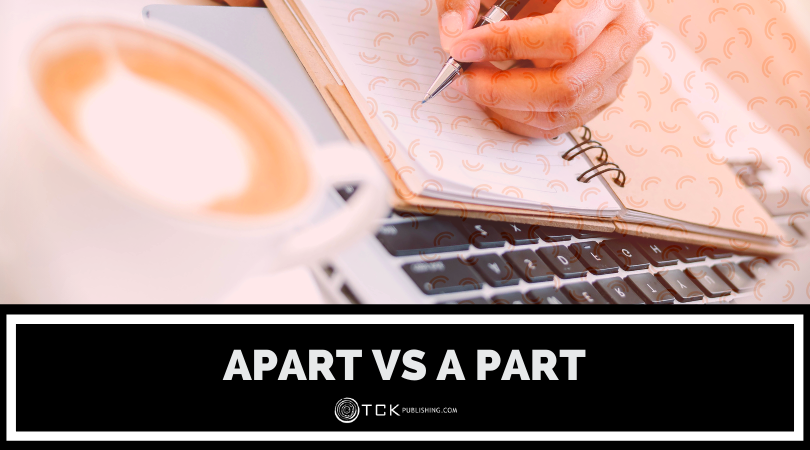 They’re separated by just a space, but apart and a part have 2 different meanings and should not be used interchangeably.

Read on to learn more about the difference between the two and how to properly use each in a sentence.

When to Use Apart

Apart serves as an adverb or adjective. It can be used to describe two or more things that are at a distance from each other, or to say that something is excluded from consideration (in other words, aside). As an adjective, it describes people who hold different opinions.

The word originated from the Latin ad (meaning “to”) and pars (meaning “a side”). This makes sense when w e think of the phrase “set apart,” which means to set something to one side.

See the examples below of how apart can be used as an adverb or adjective.

Adjective: The jurors are still apart.

More Examples of Apart in a Sentence

When to Use A Part

“A part” is composed of 2 separate words: “a,” which is an article, and “part,” which means “piece.” The 2 words are most often accompanied by the preposition “of” to convey belonging (as in “a part of our community”).

Part comes from the Latin partem, which means “a piece, division, or share.”

In some contexts, a part refers to a role in a play, film, or musical.

Note that the article a may not always be necessary. In some of the sentences below, for example, a can be omitted without losing the meaning of the sentence.

Examples of A Part in a Sentence

One common error made by native and non-native English speakers alike is the use of apart when really a part is needed.

Incorrect: I don’t feel like apart of the team.

Correct: I don’t feel like a part of the team.

Apart vs. A Part: Learn the Difference

Sometimes, a little space can make all the difference, like the one between everyday and every day.

Learn to recognize the difference between these and other similar word pairs so your writing can stay professional and error-free.

Did you find this post helpful? Let us know in the comments below!

Self Publishing Companies in Nigeria

Our website just undergone a redesign to serve you better. New books and information products uploaded on the site with great discounts. Dismiss

Find out more or adjust your settings.